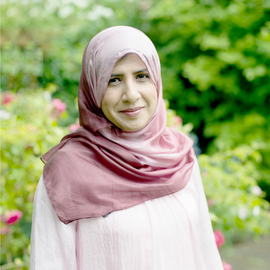 Shelina leads the world's first bespoke consultancy for engaging with Muslim audiences. Her role in Islamic Marketing is part of Ogilvy, within the WPP network. She is a global expert on understanding and engaging with Muslim consumers. She works with some of the world's biggest brands like Unilever, Nestle and Coca-Cola. She is the author of the definitive work on young Muslim audiences: "Generation M: Young Muslims Changing the World" and was named as one the UK's 100 most influential Muslim women. She has also been named by AdAge as one of Europe's "Women to Watch." She is an insider-outsider in the advertising industry having come into it having worked previously at Cable & Wireless, Vodafone and Motorola developing and marketing technologies we take for granted today like the internet (!), mobile phones and digital content.

Shelina is also a newspaper columnist writing for outlets such as the Guardian, the Telegraph, the BBC and Campaign Magazine and has a regular column at The National UAE. But while hiding under her superhero's headscarf, she became an accidental author writing about some of the most important topics facing girls and women today. Like who we are, our place in the world, and most importantly how to decide things for ourselves. Her first book "Love in a Headscarf" is a humorous take on growing up as a British Muslim woman. She has recently turned her hand to writing for children. Her debut children's book was The Extraordinary Life of Serena Williams. Her book "BeYOUtiful" for girls aged 8+ was published in May, to address the question of what does it mean to be beautiful and how girls can decide for themselves.

A graduate of Oxford University, a bestselling non-fiction author and a global expert on women's representation, Shelina is a familiar voice on radio and TV. She is a board member of IMPRESS, the only independent press regulator, set up in the wake of the Leveson Enquiry. She is flying the flag for the sandwich generation, caring for her two elderly parents every day, as well as her children. All the while managing her portfolio of work at Ogilvy, at newspapers, writing books, advocating for high quality journalism and press regulation and being a strong public voice. She is happiest when sipping cappuccino and munching on white chocolate chip cookies. She lives in London with her husband and two daughters.

You can meet her at Professional Master Course in Brand Strategy.
Check her professional profile
TOP