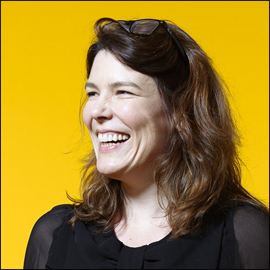 Lucy is a founder of Uncommon. Uncommon is a creative studio building brands that people in the real world actually wish existed. Either by working with clients or by creating brands ourselves.

Lucy’s background is in strategy. She started at BMP DDB, where she rose to Executive Strategy Director, also running DDB’s Global Planning Group and sitting on DDB’s Global Executive Committee. Under her guidance, DDB London was IPA Effectiveness Agency of the Year three times in a row. Lucy then joined Grey as EMEA/London CSO where she also steered Grey to win Agency of the Year at IPA Effectiveness and the Effies. She was promoted to CEO of 550 strong Grey London in Jan 2015, overseeing Grey’s strongest run of awards, new business and commercial success, before leaving at the end of 2016 to set up Uncommon with Nils Leonard and Natalie Graeme.

She’s worked across every sector, including lots of financial services, from Barclaycard to Marmite, from The Financial Times to Pepsico, HSBC to Budweiser, COI to Unilever, VW to Volvo. She’s worked on massive global brands like GSK & P&G, as well as start-ups like Habito and Halo. She is regarded as one of the best planners of her generation, having been rated in or at the top of Campaign’s Top Ten Planner list many times.

In her year off before starting Uncommon, she interned at Facebook, consulted for a media agency and mentored at Wayra (Telefonica’s start up incubator). She’s a member of WACL, a regular speaker and mentor, and has judged IPA Effectiveness, Cannes Creative Effectiveness and APG.

You can meet her at Professional Master Course in Brand Strategy.
Check her professional profile
SUBIR